“Symphonic black metal” – Wiser folk than me have in the past pointed out allusions and underlying similarities between classical music and some expressions of black metal. If you listen to Emperor’s ‘In The Nightside Eclipse’ you can hear multiple layers and textures of sound – varying riffs, melodies, keyboards and walls of noise. While some black metal stays close to its rock roots, others have produced pieces which are more like a series of movements than the typical verse-chorus-verse pattern (which has its place of course). Listening to Avantgard at the September Slaughter reminded me of such themes. Any comments?

I completely agree. Nightside Eclipse is an incredible album and Emperor has a huge influence on all members of the band. We move away from the typical song structures as we tend to focus more on the flow of our music. The writing process is quite complex, it involves a hell of a lot more than simply stringing a couple riffs together into verses and putting lyrics over the top of it. And even after a song is written, there are still changes being made to it every day, they evolve as new ideas and inspirations are explored in the rehearsal room. Kurt and Nathan are excellent guitar players, both of whom I am sure are classically trained, and Maelstrom has played drums for quite awhile. The cohesion of the band determines how the songs progress, and the result is (with any luck) a tight composition that has both radically changed from the original idea while still keeping its powerful theme, which is prominent throughout all of Avantgard’s music.

Avantgard’s lyrics evoke a lot of imagery and atmosphere, suiting the music, as well as showing evidence of a well-read person. Who writes the lyrics? and would that person care to comment on them, i.e. inspiration, what they are trying to convey?

I now write all the lyrics, but when I came into the band the four songs that existed at the time were written by Kurt. We are both well read people and our writing style is quite similar I feel. There are strong themes throughout many of the songs, as well as references to various mythological figures and deities. The beauty of nature plays a key role in writing, as does the supernatural. But then you get completely random, fucked up songs like Circle of Pain, which is based on Conan the Barbarian.

Avantgard made it through to the semi-finals of the National Campus Bands competition. That’s an excellent achievement for a local Perth metal band. Any comments?

Indeed it is. We didn’t expect much from the beginning, playing a style of music that isn’t commercially accepted. This worked in our favour however, as no one had any idea what to expect from us when we got up there for the first time. We were the only band with a double kick for fuck’s sake! Our only objective at the time was to completely obliterate the herd and leave them absolutely stunned by the attack. Not only did we do this, but we impressed the judges enough that we beat the five other carbon-copy bands in the heat to proceed to the semi-finals. We were surprised that they actually took quality musicianship into consideration and didn’t mistake it for expensive clothes and hair product.

The semi was a nightmare though. For starters, Maelstrom had to play on the “provided” drum kit which in effect halved his arsenal. A broken string didn’t help along the way, and the judges couldn’t have taken half of the patrons fleeing our set in fear during the first song as a good sign. We took it as a compliment. 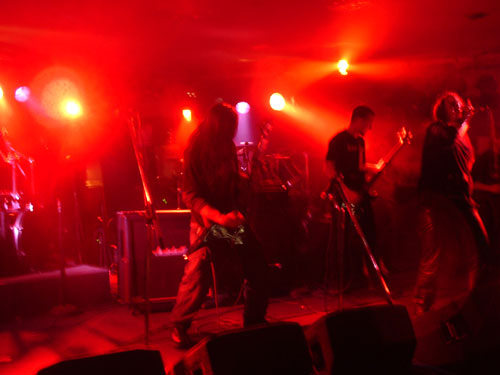 Do you have any comments or opinions on the local metal scene and its development?

The local scene here in Perth has real potential. I don’t think it has been any bigger than it has now, and there’s always more and more people coming to gigs and checking out the bands, which is great. It also helps when the majority of the bands are playing excellent music as they are now.

Your website has a lot of relevant info that does need to be repeated here. Is there new or additional news/info you would like to make the public aware of?

Not really, aside from the fact that our debut full-length album under the temporary name ‘Wolves of Nocturne’ is due to be released extremely soon. Look out for it. And also our next gig is at Heat nightclub in Perth on October 22nd with other bands Enforce, Frust, and Hated By Humanity.

Thank you for taking the time to answer my questions. Any parting comments or rants?

My pleasure. Keep checking the website for the latest updates and information on obtaining a copy of the album and always support the local metal scene.

And lastly I believe it was the mighty Angel Corpse who said it best. “Reap the Whirlwind!”

Thanks to Ildach, vocalist for Avantgard, who answered these questions during September. Check your local gig guides for upcoming Avantgard assaults. Also check out their website: http://clix.to/avantgard