Years of waiting and dreaming for the mighty Corpse to descend upon us,
were finally requited. Supported by Plague and Psycroptic, each emitting a
sense of brutality  in their own right, the crowd were silenced and spurred
on by an imposing figure, half kneeling like an almighty god. Corpsegrinder
was a powerful stage presence to behold.

The crowd were enthralled with Corpsegrinder's brutal, meaty vocals which
never failed to imprint an almost ethereal quality upon the audience
reminding us all that his voice is a force to be reckoned with.

The band's death grip on the audience was magnetic. Never failing to capture
the unwavering attention of the crowd, they played classics such as  "I Will
Kill You" (my personal favourite from Gallery of Suicide). A particularly
violent version of Disposal of the body and other demonic songs (including
new offerings from 'Kill') ensued.  "Fucked With a Knife"  was a  dedication
to all the women in the crowd. So sensitive of them.

The riff of the guitars, the sheer weight of the drums and sadistic edge of
Alex Webster's bass can only be described as amazing. Each song was
captivating, never failing to impress upon us the demonic nature of the
band's sound and proving that Cannibal Corpse deserve their rightful place
as the monsters of metal.

Corpsegrinder's vocals and the band's magnitude held the crowd spellbound
and truly was a night to remember.

I was lucky to have my arm signed by and be photographed with Alex who was
kind enough to take time out to talk to the fans, sign things and answer
questions demonstrating what a kind, decent, sweet natured person he is.

Bring on the darkness again and let the death metal legends that are
Cannibal Corpse reign upon us all! I will be waiting in anticipation for
their return. 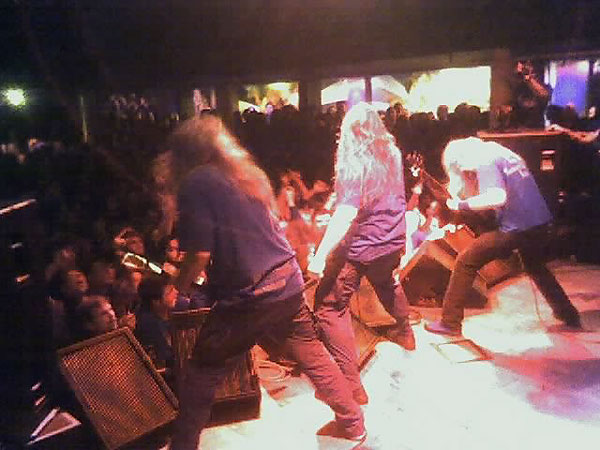