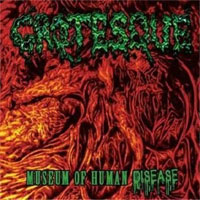 Ever picked up a brick and smashed yourself in the head with it for 35 minutes?  No, me either.  But after listening to Grotesque’s debut album “Museum of Human Disease” three times in 2 hours, My brain feels a bit like the way the brick must be feeling.

Grotesque are a band of extremes.  There is no subtlety in anything they do, no compromise and certainly no time to stop for a drink.  They use music in the same way as a tribal warrior in Uganda uses a machette, or Adam Gillcrest uses a bat.  In this band, everything else comes second to ferocity. Songs are short – although not foolishly so – and straight to the point.   Guitar leads are dispensed with in favour of the use of sweeps, high speed riffing is chosen over breakdowns, anything resembling emotions other than disgust and rage are cauterised right out…. shit, much of the time melody in general is pretty much fucked off altogether.  Compromise is a logical absurdity.

When you hear a bands’ recording you expect them to sound cleaner and clearer on the CD than they do live, all that studio refinement and mastering to enhance the sound and buff out the flaws.  Grotesque, as usual didn’t just reject that concept, they raped it.  Recorded by “hollywood” Eton, Grotesque’s debut album is a testament to the unhygenic and impure nature of their music.  It sounds dirty, unsanitary, ugly, free of studio magic, samples and/or any of the other luxuries that the recording process allows you.  They just don’t need that shit.

Anyone who has ever heard them live will tell you that the CD is EXACTLY how they sound live, give or take a billion or so decibels.  They really can play this shit THAT tight, and it comes down to the way Trev, Simon and Marc are able to lock in together, some sort of inhuman hive mind type of thing, let’s think of it as Metal Mind Meld.  There is a talent pool in Grotesque that can be freakish at times, Trev and Simon are a single entity with 4 arms, 4 legs and a 4 second fuse, in my opinion one of the tightest rhythm sections I have ever seen.  They create a low frequency of vicious sound that gives Marc and Tarren room to do what they do unhindered, uncontrolled, and create a sound jugganaut that is one of the heaviest that Perth has ever produced.   And the vocals?  That low, low, low gutteral snarl  Tarren produces could be delivering lyrics in an alien language for all it matters.  The lyrics are extraneous, the message is clear without them:  “We are NOT in the mood to comply.”.

If a constant brutal flogging was all there was to Grotesque I would find it boring, I mean there is only so much constant blasting that I can handle before I start longing for something with dynamics.  But it is most definately NOT.  There is this groove that keeps breaking through the brutality, these moshy riffs just demanding that you move your head.   They come and go like sewage washing onto the shore, making the songs punch.  And the guys can surprise you with moments where they strip it back – relatively speaking of course, with most bands sections like this would be considered heavy as fuck – and give you passages where you can actually get a lungful of air before they start hammering at your soul again.  The first minutes of “Eternities End” is one example of this, a moment of almost serene music, and in truth these are the moments I enjoy most.  The other favourite moments being the times when Trev really cuts loose at hyperspeed on the kicks.

The only problem I have with the album is that after 5 or six songs I feel like I am sufficiently harmed and am ready to listen to something a bit less….. wrenching.  Music this brutal and unflinching can be tiring for old people like me, and I find myself ready for the next CD to come on.  But that’s not a criticism of the music or the band, it is a general Brutal Death Metal thing and in that genre they can stand tall.  Hey, It is violent music, I mean “Museum of Human Disease” is never gonna be played on 96FM… and somehow, I don’t think the boys from Grotesque were all that phased.

Shame, I would have loved to hear Gary Shannon shit his undies.