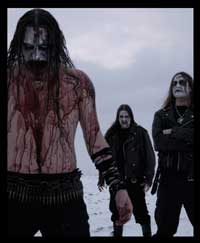 They may reside half a world away but they sure as Hell need no introduction: “Marduk”, Sweden’s supreme masters of Black Metal. They stand in a league of their own atop the tallest snow-coated Scandinavian mountain. The band was formed in 1990 by guitarist Morgan and his mission was to “create the most brutal and blasphemous metal”, and he has relentlessly upheld this value.

And now after 17 years, ten album releases and dozens of European tours later, they’re still perched aloft on top of the black metal mountain they set out to conquer. It’s been a thrilling journey for “Marduk”, one whose next chapter will see them casting a truly dark wintry spell on Australia’s mild winters as they head out on their Rom 5:12 Australian Tour stopping off in Perth on Monday August 13 at Amplifier – Special guests The Furor and Malignant Monster for this show. Tickets On Sale – Monday May 14.