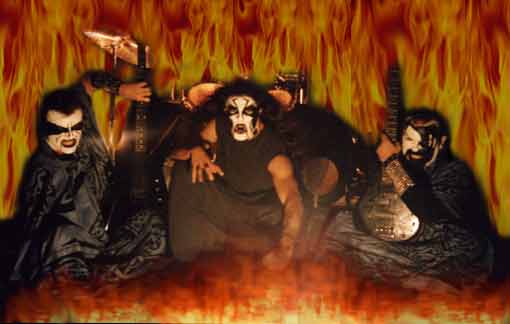 The Rise of the War Machine

The Furor began their advance in Perth, Western Australia, in September of 2002.
Out of the ashes of their former bands, Louis Rando (drums/vocals – Pagan) and Nick Bell (guitar – Samain) shared the undying urge to create a deadly strain of extreme metal that was to be the bastard son of their combined Thrash, Death, and Black metal backgrounds. Within months, quality songs had been assembled and Jon Dunlop was initiated into the group, tackling the bass frequencies.
After many strenuous rehearsals, the decision was made to bypass the EP DEMO stage and plunge headlong into recording a full length album/LP, utilising the bands funds to the fullest.

On September 10th 2003, The Furor invaded Sovereign Studios, home of meticulous producer Aidan Barton (Bezerker, Vespers Descent, Centaur, Voyager) and before long the album was recorded, the final mixing/mastering being all that lays ahead from finishing the production. The album features eight songs that will grip you with its barrage of efficient thunder speed ferocity and savage rantings delving in War, the hopeless nature of mankind and the inevitibility of Armageddon.

Onslaughts Upon the Unaware

The Furor's first show was in support of Vespers Descent's 'Three Faces of Eve' EP launch at the Amplifier Bar on Friday November 7th with Pyromesh and Pathogen. Just over half an hour's worth of skull crushing brutality was delivered to Perth's metal crowds with corpsepaint and spikes providing a visual aid to accompany the band's extreme sound. The local Perth crowd welcomed such an extreme metal act with open arms, due to Perth having undergone an absence of black/death metal willing enough to push extremes to the limit.

The band has heard nothing but positive feedback from the performance and are looking forward to their next shows which are at the Nemesis CD launch on December 6th with Avantgard and Hated by Humanity, December 20th at the Whitesands with Kerb-Stomp, Diablo and Enforce, and at the Destroyer666 licensed show on January 3rd with Pathogen and Enforce. All information about these upcoming shows is/will be available in the Western Front gig guide.

Louis also plays drums in local metal gurus Pathogen and has previously played in Pagan, Militant Mass and Dybbuk to name a few. Jon has been involved in many local extreme metal projects including Hated by Humanity, Impact Winter and Scythian. Apart from having previously played in the highly successful Samain, Nick is currently loyal to The Furor.

The Furor will stop at nothing!