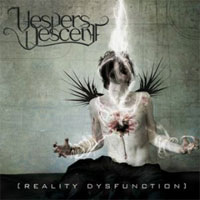 Vespers Descent is one of those bands which seems to be capable of treading a path that has been blazed by many before them but still claim it as their own, you can hear their influences in every note they play.  They are firmly entrenched in the flesh of melodic black metal, burrowed in as deep as ticks and the comparisons to the bands of the genre are unavoidable… but then that isn’t so bad under the circumstances, because Vespers Descent is better than most of them.

From the first moments of Reality Disfunction you can hear the quality of the music.  In this fast food world of slap together food and slap together songs, genuine craftmanship is refreshing, and it is there in all its glaring glory.

The guitars are the driving force, and they have a diversity all of their own.  Grant and Shannon work together on this album beautifully, they can play fast in parts, but not in the cheesy way of many MDM bands, they use a more abrasive tone and when they get it right they sound downright nasty.  The tone created by the twin axes and the bass (Adam) is notable in that it is just right for the band, maybe it is just studio magic but by fuck it sounds slick.  Amazing it is, that they can inject as much melody into their songs without the keyboard that so many of the modern MDM bands use, and yet not compromise the heaviness of the sound.

The leadwork is impeccible, neither boring nor wanky and generally spot on, and there is a lot going on that you pick up as you listen to the songs a few times over.  Yet the main factor that makes the guitars so well crafted is that they don’t just smash away, they know when NOT to play as well.  Because as good as the guitar work is on this album, it is overshadowed by a force far greater.

Ben is known to us all as a brilliant drummer, and on this album he pl ays like a man on a mission.  The kicks are fast when they need to be, staccato when that is needed, they are just always spot on.  The fills are quick and frequent, and the rest of the handwork precise and deadly tight.  In every song he shines, from the fast paced kicking of “Blinded by Fear” to the controlled geometric rhythms of “Crypyic Visions” and “Eclypse” he shows an vast range of emotions can be created simply by backing off a bit before erupting again.  With some bands I long for the chaos that drummers can unleash to revitalise the songs and make me feel “sucked back into the songs”, but I don’t feel that when I listen to this album.  Everything is just in balance beautifully, the sign of a band in sync.

Vocally, I am torn.  I love the vocal style in general and the way Richard’s voicetone sits so beautifully within the mix, again not too heavy in style but just right for the band.  I Really like the spoken sections in “Reality Disfunction” and the moments when the vocals are used as a rhythmic instrument of their own.  Despite the lack of any real backup vocals, they carry through well.  That said, I keep waiting to be hooked by a chorous that has the sort of grabbing power to have me singing along, and it just don’t come along.  Catchiness is not everything, but something is missing for me in some of the songs.

The best thing about this album is the way I discovered it.  I bought it at the launch, listened to it on the way home, hacked it to MP3, checked the CD in my rack and the songs into random rotation… and to be honest then forgot about it.  But I kept hearing this song on one of my random mixes that I couldn’t identify.  It sounded kind of like Agathadaimon, kind of like At the Gates, couldn’t put my finger on it.  It keep bugging me until I tracked it down, “Blinded by Fear” by Vespers Descent, and a cover of a song by At the Gates.  Wasn’t I suprised.

The worst thing about this album is that it is only 24 minutes long.  What a tease.