Show your support for Aussie metal by wearing your WESTERN FRONT or favourite Australian band shirt today at Soundwave, and to top off your day, don’t forget to grab your FREE copy of the WESTERN FRONT.com.au AUSTRALIAN METAL COMPILATION: VOLUME 1 on your way out! 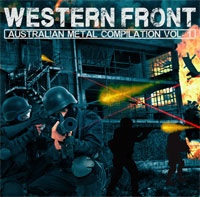 Congratulations to all those recruits who made it onto the CD, and to those who unfortunately didn’t make it this time around, we encourage you to apply again for Volume 2 as this is an excellent opportunity for any serious musicians to promote their band! A downloadable version of the compilation that features exclusive bonus tracks will also be available very soon, so watch the forum over the next few days to find out who is included in the additional tracks!