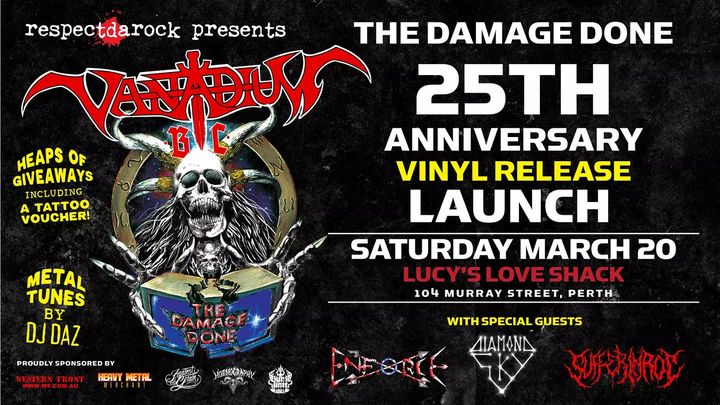 “respectdarock records” Presents VANADIUM B.C. 25th Anniversary of The Damage Done and Vinyl Re-release (Being Exclusively released by respectdarock records) PARTY! Also a reunion get together for the 25th Anniversary of The White Gum Valley Riot launch show from 1995! Joining us will be Suffer In Rot, Enforce & Diamond Sky.
DJ Daz from Western Front will be spinning all your favourite HEAVY tunes in between sets.
We have the date now for your calendars! 😎🤟
Stay tuned for pre sale ticket link soon and door sales if available…
Heaps of great giveaways from Heavy Metal Merchant, Hornography and a Tattoo Voucher from Wade Barry Tattoos at Against The Grain Tattoos in Warwick…
*This will be the only reunion show for the White Gum Valley Riot crew and for the Orient Hotel launch crew in Fremantle from 1995 so come down and catch up with ol mates and new. 😎🤟

Vanadium B.C.: Formed in 1993 as Vanadium the band played in the “Golden Era” of Western Australian Metal and released their debut album The Damage Done in 1995. In 1996 the band was buried. In 2018 almost 22 years later they were born again and rose from the grave as Vanadium B.C. With The Damage Done 1st pressing now selling for $1000+AUS internationally they are bringing it back for the 1st time exclusively on Vinyl through respectdarock records. Get ready for a blistering set of their classic 90’s tunes and some new ones from their revamped line-up of their Thrash influenced “Pure Australian Metal”!
https://www.facebook.com/vanadiumbc

Suffer In Rot: This Australian Death Metal act return here on May 16 for their 1st live performance since 2018! Established in 2013 they are bringing their old school flesh ripping Death Metal for a brutal live set not to be missed!
https://www.facebook.com/SufferInRot666/

Diamond Sky: Channeling the Golden Era of Heavy Rock in a head banging collision with the power of traditional Heavy Metal. Diamond Sky create their own fist pumping anthems for the new generation. Get ready for a horns in the air energetic live set of ball tearing anthems!
https://www.facebook.com/DiamondSkyAus/

Enforce : The Perth Thrash Metal Veterans established in 1997. Coming back in 2020 with their powerful new lineup. Brace yourselves for a blistering set of their own unique brand of Aussie Thrash!
https://www.facebook.com/enforceofficial/

Western Front: The passionate forerunners in the promotion and support of Western Australian Metal and also all other Australian Metal from the other states of our country. The CEO of Western Front for almost 20 years Daz will be becoming DJ Daz again for the night to spin your most Metal tunes in between the sets! DJ Daz will start this PARTY! from 7.00pm!
https://www.facebook.com/wf.com.au/

The show proudly sponsored by: