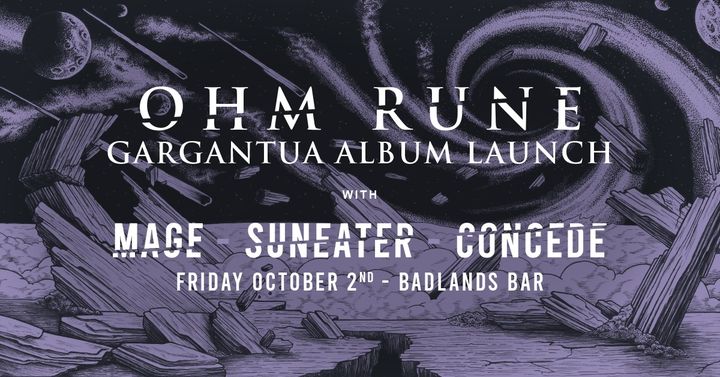 Greetings to one and all, Death Mountain Records are proud to announce the debut album ‘Gargantua’ from Ohm Rune.
The original purveyors of sonic dominance are ready once again to re-assert their place on the throne of good times.
Like the elastic in your favourite jocks they snap back onto the stage and reveal to you the mysteries of the universe, one screeching back-beat at a time.
This is not your ordinary barn dance, this one is a biggun. You thought they were gone, but instead they’ve been basting and slow cooking a big, fuzzy, bombastic beast of an album. Nine tracks spanning 45 minutes of crushing stoner metal. The debut single Temple, is a track that pushes the boundaries of what you can
expect from a two piece band while still staying true to their stoner metal roots.

Come and celebrate this union of gravy and awesomeness by drinking infinity beers and banging your collective bonces.
Oct 2nd at badlands is where it all goes down, along with some other heavy mofos that are the cats pyjamas.
Come one and all, be merry, drink sherry, take a ferry…
Let’s shake off the shackles in a most excellent way.