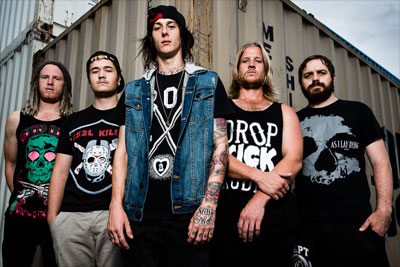 For those of you unfamiliar with A Breach Of Silence, they hail from Brisbane and when it comes to metal they have taken upon themselves to mix a bit of the new with the old, by combining a blend of metal core and old school power metal influences. In May 2013 they hit the road to support Chicago based Born Of Osiris on their Australian tour.

Tammie Parr fired a few questions at Blair Layt (bass/vocals) to get a bit of insight about the band.

How did you come up with the name “A Breach of Silence”?

We didn’t want a name that was some kind of metaphor. We needed it to be self explanatory, and ABOS was basically chosen from a shortlist that we made at the time.

Can you give me a brief history of the band?

We’ve been a unit for about 4 years now. Been through 2 line up changes since then, and released our first album about 8 months ago. ABOS started in Cossie’s old house when he got together with a few room mates and started writing music. After rounding off the band with Andrew on drums and myself, Blair, on melodic vocals and bass, we started playing shows around good old Brisbane town.

If you had to describe your sound to someone who has never heard “A Breach of Silence” before, how would you describe it?

“POWERCORE” haha. It’s a term that we have been jokingly throwing about recently, because hey, all bands need to be put into a genre, right? We didn’t quite fit into the traditional metalcore title, and with the power metal influence, it seemed to be the only way we could describe it.

What or Who are your main influences when writing song and music?

Each of us have different idols that we look up to. Even though it’s important to have people like this to draw an influence off, it’s always best to look within yourself and your current surroundings for inspiration when writing music. Otherwise it could come across as copying. My influences though, are people like Bruce Dickinson and Jorn Lande. If i could sing half as good as Jorn, i’d be a happy man. Cossie loves basically anything Tim Lambesis touches. Andrew is more into the industrial side of metal, and loves the faster blast beat kind of songs to get him going and Rhys and Kerrod like the more new age kind of stuff like Parkway Drive to August Burns Red.

Your album “Dead or Alive” released last year, you worked with Henrick Udd and Fredrick Nordstorm. How did you find the recording process?

Recording with Fredrik and Henrik was an amazing experience! We learned more over the 2 week recording process than what we have our whole musical careers! Those guys are absolute geniuses and bring such an awesome creative spin to the music we’re trying to lay down.

Who did the album art for your album “Dead or Alive”?

Cossie found a guy through some contacts on the net that lives in Romania called Gabriel. Cossie was sent a fair few submissions to an idea that he posted online, and Gab’s work shined a mile above any that we saw. The guy is a modern day picaso!

I see your song “Dawn to Rise” won the Presitgious Qmusic Award for Heavy song of the year, 2012. How did that make you feel?

It felt great! It was the first time we had won something as a band and it really gave us a lot of motivation to keep doing what we are doing. Even being nominated 2 years in a row was something we were stoked about!

I watched you video clip for “There will be Blood”. How did you come up with the concept for this video? (Personally it reminds me of Point Break :))

Thats the looks we were going for!! Good to see it came across that way, haha. We had a lot of fun recording it, and whilst it was a group thought out process, our 2 filmographers, Caleb Graham and David Wayland played a big part in a lot of the ideas for the video. Caleb also, filmed Parkway Drive’s clip for their song, Karma, so he already had this level of awesome that he brought to the clip.

What does the future hold for “A Breach of Silence”?

We have some awesome things that we will be announcing over the coming months! More tours, new directions, a new album and a lot more stuff, so the future so far looks great! We like to keep busy, so that we’re always doing something and having fun, that way nothing goes stale and new ideas are constantly being harvested 🙂

If you could have any kind of ‘rider’ for playing a show what would it be?

We played a show a few months back, and i think it was our first actual “rider” haha. It was only beer, but free beer to musicians? it was like, “boys, this is what dreams are made of” lol. I know that the bigger shows a band plays, it’s kind of a given that there’ll be beer backstage, but it was a funny thing that finally happened to us that we laugh about when its brought up.

If i was to choose ANY kind of rider though, it would have to be a stocked fridge with spirits, Bundaberg rum of course, and a traditionally cooked spread of Greek Food. You don’t want to have anything that will repeat on you on stage though, so i think Greek food would go down nicely with the never ending supply of rum! 🙂 Could you make this happen for us at our next show please? haha