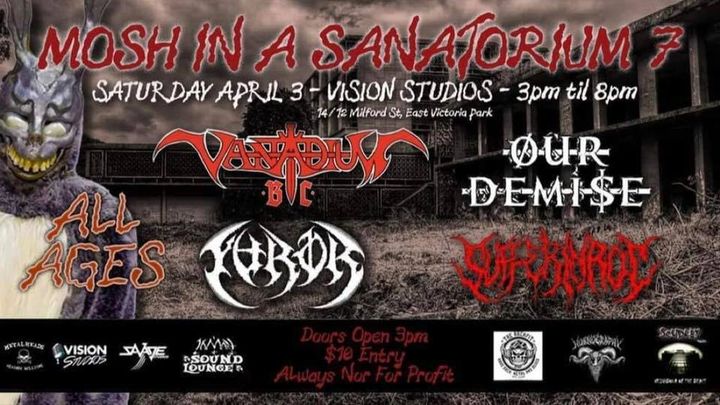 Suffer In Rot
The Southern Death Metal act from Bunbury return to the Perth stages. Established in 2013, they are briniging their Brutal live show here for a set not to be missed.
https://www.facebook.com/SufferInRot666

Vanadium B.C.
Formed in 1993 as Vanadium, the band played in the “Golden Era” of West Australian Metal and released their debut album The Damage Done in 1995. In 1996 the band was buried.
In 2018, almost 22 years later they were born again and rose from the grave as VANADIUM B.C. With The Damage Done 1st pressing now selling for $1000+, they have just re-released it on special Vinyl formats for the 25th Anniversary of the album.
Get ready for a bistering set of some of their classic 1990’s tunes and more with their new revamped lineup playing their Thrash influenced “Pure Australian” Metal.
https://www.facebook.com/vanadiumbc/

Our Demise
New young Metalcore act Our Demise are the next Generation bringing their awesome live show here for MIAS 7. With members still in High School this young band must be seen live to witness their heavy musical power years beyond their youth.
https://www.facebook.com/0urDemise/