A wise man once told me that you can judge a metal gig by how sore your neck is the following day. Friday’s Hornography at the Rocket Room made the kind of impact on my body that only Christopher Reeve would know about. If you missed the opportunity to age a hundred years in one night, then read on for my take on what was easily one of the top 5 local shows of 2011.

Early punters could be forgiven for wondering if they entered the right venue upon hearing Claim the Throne strumming away unplugged. Kicking back, downing Jäger shots and clearly enjoying the relaxed atmosphere, the boys (and girl) mirrored a medieval bar setting, inviting audience members to join in on tambourines and the like.

It was incredibly refreshing to hear their well known songs taken down a notch, thus enabling the listener to discern all the melodic elements in the music. No earplugs needed here, folks! (Not yet anyway.) Claim are the kind of band that belong on the European festival circuit and with a massive Australian and New Zealand tour slated for September, is looks like they have many more villages to pillage!

The award for ‘Most Popular New Kid’ goes to Cold Fate. With a mean age of just 21 and seemingly coming out of nowhere, the thrash- influenced five piece have already developed a loyal fan base. More than once have I heard someone utter; “Hey, we have to get there by 8:10 to see Cold Fate, so empty ya vessel!”

Tonight however, the boys weren’t true to their name and managed to set off the fire alarm two songs in. We were wondering if the night had come to a premature end with fire fighters walking through the crowd. Everything soon returned to normal, with a certain happy high herb lover removed from the venue and the amps turned back up to 11.

In all honesty, Cold Fate absolutely tore the audience a new hole with a blistering set, the best I’ve seen from them yet. The lighting, sound and stage presence moulded together perfectly, creating a harmonious yet deadly mix. With a Kreator cover thrown in to please the old- school fans and impeccable guitar playing courtesy of Cameron Nicholas, Cold Fate have officially graduated from Mum’s garage and are now enrolled as a definite leader in Perth thrash.

By the time Sabotage took to the stage, I noticed a few bleary eyes ready to chill out and nod their heads to the songs of Black Sabbath. The vodka was well and truly running through my veins and I relished the chance to hear some of my favourite songs played by accomplished Perth musicians. Simon Hallett added his own personal groove to a Geezer Butler bass line, while Mark De Vattimo added Ozzy Osborne to his repertoire of pitch- perfect front man impersonations. (At the last Psychonaut gig I could’ve sworn I heard Lemmy in the room!)

Girls, if you’re yet to book your annual check up, there’s only one band out there that will gladly help you out. The Mighty Scrape give new meaning to what KISS once proclaimed with ‘Lock up your daughters.’  This is the band who says, ‘Lock up your Daughters, Wives, Grandmas, dogs, cats and gerbils.’ 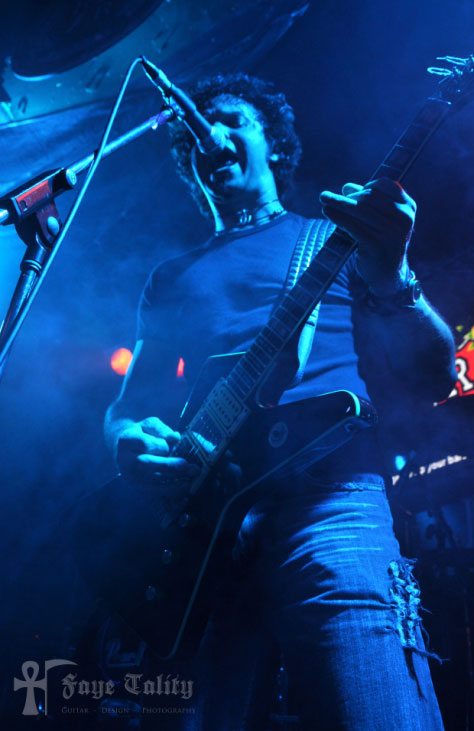