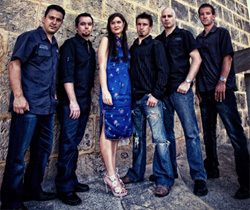 Evolution Machine is a new band that is about to emerge onto the metal scene, with their first show on the 13th of February. The band is a supergroup of sorts, consisting of members from previous accomplished metal acts. To find out the dirt check out the new interview with them that I’ve just put up on Western Front, for the lead up to their upcoming show.

To check them out, head down to the Civic Hotel in Inglewood, on Saturday the 13th of February, 2010. Supporting their maiden expedition will be Voyager and Lacrymae. You can have a look at the gig guide for the full details of the show.