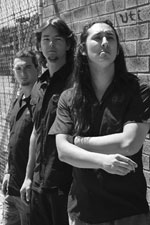 Local tech-metal masters Under The Influence (UTI) will play their first show for 2009 on Sunday 12th April @ Black Bettys, Northbridge.
Supports Include Chaos Divine, Opia and Ravior. Building from a successful Black Bettys show in April 2008, UTI are back with a bigger production and some new tunes for punters to feast their ears on! The three piece have been notably absent from the local scene for some time due to the writing and recording of their third album due out later this year.

Their performance will feature songs from previous albums, “UTI I”, “UTI II”, plus a few examples from their yet to be released third album titled, “The Brutal Harsh Honest Truth”
http://www.uti.com.au for more info on band and bio.