Since their inspection in 2001, Vespers Descent has endeavoured to create metal of the very highest quality and share it with Australian audiences. Drawing early influences from the Florida Tampa Bay sceneand the more melodic sounds of the Gothenburg Swedish scene, the band forged a sound that to this day has continued to evolve and grow.

The Band’s first foray into a recorded production came in 2003 with the creation of the “Three Faces of Eve” EP, which was released amidst a raft of live performances and constant rehearsing.The result ended in Vespers Descent snaring two important international supports, namely Mayhem and Opeth, which helped the band gain some recognition just prior to this first release.

The EP launched in November of 2003 and was considered by many as abreakthrough for melodic death metal in Australia. Throughout 2004 Vespers Descent continued to promote their EP along with supporting many reputable Australian metal bands such as Destroyer 666, Days End and Alchemist. The band was also selected as support for the Perth leg of Exhumed’s Australian Tour 2004. After supporting Days End on their national tour. The band continued to finish up material for a full-length release slated for 2005.

Vespers Descent entered the studio in 2005 to record their long anticipated album, only stopping in June for 10 days to jump on the national tour supporting US death metal merchants Hate Eternal with fellow death metal purveyorsPsycroptic. The band was met with much praise around Australia’s east coast, selling out all copies of their EP, shirts, and samplers. Returning home, the album was finished up in September and after filming their first clip to the song “Cardinal Red”, Visions in Verse was released on November 5th 2005.

The band found itself with a new line-up in 2008 and a need to convey this change through the creation of a new EP entitled “Realty Dysfunction”. The 6 track EP featuring 4 new blistering tracks and production by Peter Witches of Soilwork, once again raising the bar for Australian melodic Death Metal, proving to the world that Vespers Descent is a force to reckoned with. After the success of their EP launch the band was invited to support “Children of Bodom” on the Perth leg of their Australian tour.

In 2010 Vespers Descent entered the studio once again in order to craft a follow up to their successful EP “Realty Dysfunction”. The Band decided that the only way to truly capture their new sound, developed through a yearlong writing process, was to be involved with every aspect of the musical production. Thereforeafter 10 years of producing world class Australian Metal Vespers Descent looks confidently towards the release of their new Full Length Album Entitled “Fragments of the Forgotten” Due for an early 2011 release. 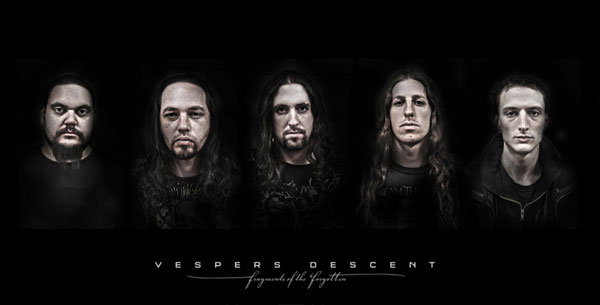