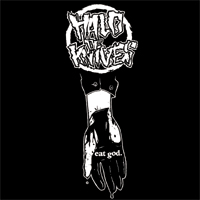 Splitting up in 2003 and having some members go on to form Extortion it comes as no surprise that the 11 tracks featured on this cd are nothing short of ferosious, noisy and, overall, just darn heavy. Whilst there are similiarities between Extortion and Halo of Knives, Halo of knives heads for a more noisecore/grindcore approach, virtually leaving out any more tradition hardcore elements found in Extortion. Similiar in style to bands such as Nasum and Napalm Death, it also then comes as little surprise that lyrically the band tackle many social and political issues, spat out with fury and disgust by the vocalist.

This is a slab of fast, punishing music for any fans of heavy music, in particular ugly grindcore played just the way it should be played. It's a great pity that these guys only managed to release the cd well after their decline because they surely could have grown to become more than just a great local band. However Extortion lives on and, not surprisingly, are also an amazing band in their own right.

Top-class grindcore that is undeniably world class in its delivery and virtually faultless.