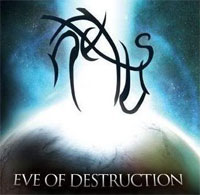 Nexus are an enigma.  They are unique on a level that very few Perth bands can even conceive of, let alone write.  It seems at times that their collective creative energy is like a chemical reaction running out of control, a virus released without restraint or consideration to the safety of the population.  It is obvious that nobody in Nexus is telling anyone else the way they should be playing, the spice must flow and to hell with the Sandworms. Co-released in 2009 with their “second” album “The paradise Complex”, “Eve of Destruction” was considered by the boys from Nexus to be the “lesser” of the two albums as it consists of older songs, and thus is without the insanity and mindbending complexity of TPC, but that is a laughable concept as “Eve of Destruction” is far from being a “lesser” album in any context.

Dan the drummer and vocallist, Josh the bassist, and Dylan and Geoff the axe twins are all talented musicians in their own right, but as Nexus they have created something that is parallel to reality as we know it.  The music is beyond hard to define, shit even the genre is a mystery.  We can rule out melodic death, although the guitars could be looked at that way in parts, but the vocals would suggest a much more black metal influence.  So what then, Black metal?  Definately not, the guitars are far too free-flowing and alive for that, and the drums too expressive and unfettered.  There are moments where the guitars could almost display a power metal influence, but then the drums go to work like a plastic surgeon on angel dust, and any similarities are sliced away.  Progressive is the genre that I personally feel fits this album best, but that is like calling a weasle a family pet.  No, it is something elusive, and THAT is the story of Nexus all over.  Irrational, unconventional, occasionally jarring, there is frantic chaos and illogical structuring behind every door, speed and dischordance jumbled together…. and then they throw something conventional in like the thumping opening minute of “Day of Glory”, and that is just as disturbing for its contempory nature.  Nexus sound like extreme metal filtered through Cl ive Barker’s head.

If the music of Nexus’s “Eve of Destruction” is warped, the conceptual thought behind it is totally mutant.   There is a whole tale behind the music, it is documented in the booklet of “Eve of Destruction” and it reads like Issac Asimov’s nightmares.  The sci-fi theme is fairly unexplored in Metal and a theme like this is bizarre to say the least, and seems to be the inspiration for the alien-sounding music on this album.  Included also are the lyrics, and they are full of imagery, almost poetic in parts.  Again the Nexus contrast leaps forth, as such words of beauty are delivered by Dan in a tone like a mulcher being fed aluminium cans, and all while the while delivering some quite brilliant drumwork.  Remarkable talent there.

Despite the cleverness of the music, there is a price to be paid.  As the guitar tone has been chosen to deliver their complexity clearly, some of the grunty bottom end and overdrive has been stripped out, so when they need the thick metal punch, it can’t deliver with the intensity I crave.  Due to this, the mosh factor is a bit absent too, much of the time I listen with fascination but none of the desire to get up and destroy.  That said, I am again taking a traditional view of metal, and that may be exactly why the boys from Nexus have chosen against it, tradition is anathema, the generic despised.

“Eve of Destruction” is a masterful first album.  Whether it is your cup of tea or not, there is an overwhelming sense of Nexus grinning like maniacs as they are pushing you outside your comfort zone, and knowing that you know that they know.