The band was formed in the summer of 1996 and brought out a demo of five songs in 1998. The demo, called Premonition, is believed to be a collector’s item, as emails from afar have demanded it due to predictions of success. 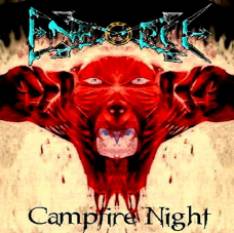 It has been 2 years and a few members since Enforce released their first album through Sonic Wave in Singapore. Enforce have only been playing locally in Perth, Western Australia but hope to do shows outside of their home state in 2003, promoting the release of M.O.D.

You can purchase this album locally from Music Finder, Dada’s, 78 Records and Mills. Most overseas purchases can be made through Sonic Wave and Dead Sun Records. 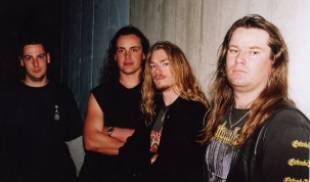 Enforce feel the current line-up is here to stay, which has showed in live performance plus a steady gigging. The band voodoo that has plagued most of the bands in Perth has finally stopped for this thrash/death metal combination. Guy’s Max Cavalier/Glenn Benton vocal style suites the Enforce sound. With George and Troy joining the quartet, it brings a different outlook to the song writing and structure. 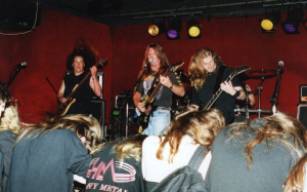 The bands live shows have recently pulled good crowds and have good response from local and international mags. Recently Enforce were published in “Groove” magazine and still receive good reviews in European countries. The band is known as the quiet achiever who is slowly taking the world by storm. The band is in the process of recording their new album at their home studio with the help of Aidan Barton.

Enforce feel that telling you about them doesn’t compare to the live experience. Many have been surprised with a song selection that is so different than your general thrash/death band.