MAXIMUM PERVERSION: Big bunch of girly drop kicks that think they can play grind metal in the vein of early Carcass, Impaled, Napalm Death and Radiohead. Actually they aren’t so bad at it; the evidence being their recent support slot for Pungent Stench along with making it into the top 5 for the best local metal band awards. This, along with their past achievements with the album Repugnant Perturbation Excursion, support slots for bands like Blood Duster and a video clip on the way makes the future look cool for these wickidy whack cats. I managed to round up all the perverts in the attempt to have a nice clean interview – if you read on you’ll find that this did not occur.

Andrewlina: The leather… the sweat… the passion!

Danielle: Any band that dresses in leathers on stage is just the sort of act we’d like to support! And that other band who supported them was good too!

Jacqueline: The wank in the dunnies – I flogged it hardddddd shit thank god there was a mirror!

2. You’ve got a new song written called One Shot One Kill, about “the Washington Sniper”. Did you know that there was actually two snipers? Don’t you think you should rewrite the lyrics?

Danny: Yes, there were, and the lyrics now show a chronological series of events from the time when the police released the reports of a white van being seen at each of the crime scenes, through to the arrest of the two suspects who actually drove a Caprice!

Andy: That’s nothing to do with me man, I just work here.

Jasey: Wat u got any muff mags ? (while skimming thru a target lingerie section)

3. We can’t of course forget the wonderful appearance in Kerrang! magazine, but I think it will confuse readers because two people can’t play drums/bass/vocals/guitars and of course keyboards in Maximum Perversion? Why didn’t you send in a proper picture and not one of two losers?

Danielathon: The other two are there but they are on their knees…

Jonathon: We are the heart & soul of the band – the other two LOSERS can send in their own damn photo! 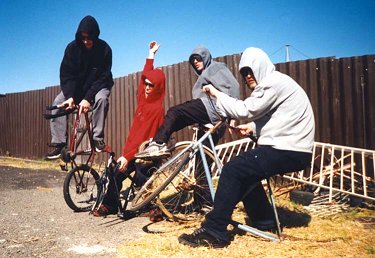 4. On the aforementioned Black Steel support night, you guys decided not to dress up as normal people and come out in your day to day outfits of an Arab/80s Cocaine snorting pervert/Pirate/Weird old man (see pictures). What’s it like having to pretend to be normal people for those other gigs?

Azza: Hard… and rigid. The punters really bought out the pirate in me.

Jozza: Every day I pray and don the ceremonial robes…. only on Saturdays am I permitted to take them off! Including the glasses.

Dazza: I know I can’t see you, but I suspect you’re wearing lingerie while you conduct this interview!

5. Black lingerie with a purple bowling cap! You were half right. What’s all this crap I hear about side projects, which may have included garbage like Cuntscrape, The Scoundrels, Hated by Humanity, The Raw Doctors, In:Extremis and of course our favourite Champagne Enema? Isn’t Maximum Perversion enough?

Ando: You’re a side project!

Jonno: All of them are side projects to each other – every riff that gets thrown out of one band drifts though the other bands until it finds a home…

Danno: … If not it goes to Centerlink. How do you know that MP isn’t a side project!?… ah, turned the tables on ya, what you got to say to that, huh?

6. Nothing, fag. Are you going to record something new? I’m getting sick of listening to Repugnant Perturbation Excursion over and over again like an obsessed Carcass fan.

Jive Bunny: It’s simple economics, people: give us money and we shall record! Or blow it all on cocaine and hookers! WE SHALL RECORD!!!!

Adult Chat Network: I fully agree on this matter and I find myself sitting in the nude at midnight starring at the moon, with my hand on my chin, dreaming of the next album while I listen to this album. Seriously!

Date Rapist: There have been some demo recordings made which we plan to release soon. We just have to add the finishing touches… Of course, you could try incorporating new elements in to your RPE listening sessions, like standing on your head so the music sounds upside-down!

7. If someone wanted to get a hold of your even older releases Fun with Scum and Root Kettle Stein how would they do it? And don’t tell me that they can’t because that’s rubbish.

June: You can’t get Fun with Scum anymore – we sold the rights to a Portugese advertising company for use in car and tooth-paste commercials. Anyone who has a copy must hand it over immediately or face international copyright law!

Janet: You could meet me late at night near the footy club toilets and ill see wat i can wip up. 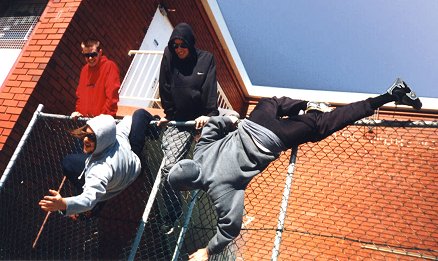 8. How helpful. Why doesn’t Jason do any vocals? Is he scared?

9. I saw Jon sit down because he couldn’t be buggered at a HQ gig, that’s not very professional, what do you have to say for yourself mister?

10. Andrew why do you keep asking for beer during your sets, do you drink alcohol or something, and more importantly do you pay the person back when you say that you will?

Andrew Daddo: Because when I’m on stage I feel invincible, like I have the power to drink 10 beers and I forget to stock up… and yes, I’m good for it! I’m still waiting for someone to spike my drink…

11.You won’t have to wait too much longer, Andy Capp. Dan is there any truth to the rumour that you’re a big nancy boy?

Dan “Nancy Boy” Majer: Hey man, pink isn’t just a girls’ colour! I can wear any colour I want! And so fuckin’ what if I bought it at Miss-Shop!?

12. Thanks for the interview girls, we look forward to your next gig, congrats on the Frust support gig and release a new album with that song you’ve written about yourselves called Morbid Tent Wank. And don’t try and tell me some bullshit story that it’s about someone else because you’re all full of it.

Jon: No, it is actually about me…

Dan: You are hearing me talk.

Jase: yea na wat,u have been , its about Jon alright .Now i have to prepare my war helmet.
FUK YOUR EARS