Could you give us a brief bio and self-description of The Uncreation?

The Uncreation was formed in January 2004 from the band that was Nemesis. We scrapped a lot of the easier\older songs in favour of a more extreme death\black metal approach and changed our name to The Uncreation.

Does The Uncreation have any specific aims/goals, and are there any particular themes/concepts/mind states it wishes to convey in its music?

To create music that is meaningful to us no matter if other people like it or not. Hopefully they do though. As far as specific goals are concerned we are trying to save enough money to record a full length album. We would like to say we all have strong atheist beliefs, which is conveyed in our lyrics. 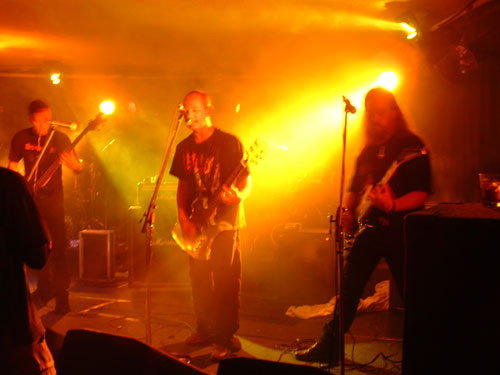 Following on from the last question, at the September Slaughter gig, you mentioned one of your songs was inspired by the works of H.P. Lovecraft. Care to elaborate on that? Any other authors/philosophies you’re interested in?

I myself am a huge fan of H.P. Lovecraft. In fact when we finish our album it will be titled “Dreaming in ‘Rl’yeh”. The cover artwork is of the Cthulhu himself. Some of the lyrics I write are inspired by the Cthulhu Mythos and the Necronomicon. I find some of the writings of Friedrich Nietzsche fascinating and stand true even to this day. [Aye, hail eternal recurrence! – SG].

Any opinions/comments on the local metal scene?

Yeah, there are some awesome bands out in Perth at the moment. Maximum Perversion, Psychonaut, Nexus, Avantgard and The Furor are all great bands.

Where can interested punters get more info and materials from The Uncreation?

Turn up to our gigs or our first cd Nemesis – The Uncreation is available at 78’s, Dada’s, Music Finder or through band members.